10 Emerging Trends for Mobile App Development in 2018 and Beyond 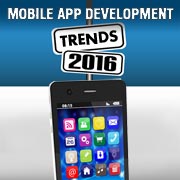 The usage of mobile apps has exploded over the past few years. With the ever growing adoption of modern smartphones, more and more consumers are using apps to order their favorite food, book tickets, perform banking transactions, listen to music on the go, etc. Today, our world is a digital sphere, where keeping in touch with friends across boundaries is no more a chore, and as the number of mobile apps keeps on increasing, so does our ability to perform hitherto difficult tasks.

The growing demand for more functional apps has also resulted in widespread interest in mobile app development, especially amongst independent and freelance developers. Since an operating systems' mobile app store is a level playing field, anyone can create an app which could become the next smash hit. Flappy Bird, the indie game, raked in $50K daily at the height of its popularity, resulting in the immense success of its small-time developer!

As we have stepped into this New Year, there are quite a few interesting mobile app trends which mobile app developers, such as you, should keep a lookout for. From brand new technologies to older ones finding their feet, a spurt of new programming languages, etc., 2018 has a lot in store not only for the consumers but for the developers as well.

Here's what you need to know.

1. Cloud Technology Finally Finds It's Place: No surprises here. From the average consumer to the tech professional, everyone has heard about the benefits of cloud technology, and how it can to change our collective lives. Today, cloud computing is not only fast, easy to deploy, and inexpensive; but also makes a good working argument for both large-scale enterprises and small mom-and-dad joints.
Dropbox, OneDrive, and Google Drive are just the tip of the iceberg, as in 2018, we can expect new powerful apps which directly run on the cloud and take minimal space in the phone storage. Syncing data - working on an app on the phone and then continuing it from a tablet or desktop will also see a huge acceptance.

2. Enterprise Mobile Apps Get a New Lease of Life: It's not a secret anymore that more and more developers are gravitating towards developing enterprise mobile apps. The reason being that such apps, which make it easy to keep large teams connected, as well as track key metrics and KPIs, are now required by almost every small and large business to some extent.
43% of the enterprise app developers earn more than $10,000 per month, as compared to the 19% of the developers who develop consumer-focused apps. Enterprise app stores are also predicted to become the next big thing, as with more B2B interaction, a tremendous opportunity will be offered to new developers.

3. IoT will Open New Possibilities: IoT, or the Internet of Things, is already a $19 trillion industry, and over the next five years, more than 5 billion people are expected to be using an IoT-driven technology in some form or the other. Today, IoT is present in modern wearable technology, smart thermostats, smart bulbs, dimmable streetlights, etc.
In the coming year, expect this technology to be rapidly adopted for mobile application development, while allowing for more personalized user experiences across a variety of devices.

4. Location-based Wi-Fi Services Become Commonplace: Mobile location services and Beacon technology are now starting to blur the boundaries between online and offline advertising, especially in the retail sector. Apple had already integrated the technology within iBeacon, and in 2016 Android followed suit.
In the following years, Wi-Fi will be used for more than just internet access, as more and more public hotspots would also double up as location access points. App developers are also expected to follow suit, by building apps which take advantage of such location-based Wi-Fi services.

5. m-Commerce to be the Next Great Opportunity: As e-commerce giants such as Amazon and eBay flourish, the usage of m-Commerce apps is also expected to increase in the coming years. With more smartphones featuring technology such as NFC, Fingerprint recognition, etc., using a mobile phone to pay for transactions, amongst others, will also find ready acceptance. Developers will also have the opportunity to build m-Commerce apps which can provide additional functionality to the consumer.Read our article which describes the models, benefits, and future trends of mobile payment solutions.

6. High-quality UX to be the Norm of the Day: Besides a nice look and feel, smartphone users today expect their apps to be more intuitive and provide more relevant content suited to their own likes and dislikes. In the coming year, developers will have to focus more on answering burning customer questions such as whether the app is secure enough or whether they need too many user permissions, etc.?

7. In-App Advertising and Purchasing Will Grow Steadily: With a growing number of smartphone users using their mobile apps to perform mundane, day-to-day tasks, the revenue generated from in-app advertising and purchasing is also steadily increasing. According to the latest figures, in-app purchasing from mobile devices touched approximately $9 billion in 2017. In the coming years, expect application development trends to move away from simple banners and integrating advertisements in a fun, non-obnoxious manner for the end-user.

8. More APIs to Accelerate Innovation: As we move towards a future where mobile app development necessitates rapid development across a variety of target devices, an API-first approach ensures both the agility and flexibility with which the app can function.
Today, one of the hottest mobile app trends to impact 2018 is the ability with which developers can leverage a large catalog of JSON/REST APIs, ensuring a lot of backend work such as data storage, retrieving information, etc. is taken care of.

9. Application Security Becomes Necessary: With rapid technological advancements being made on a daily basis, application security, as well as general smartphone security is a major concern. Currently, most of the top 100 apps in the Google app store have already been hacked, and the picture isn't that pretty on the iOS side as well.
Therefore, with Google, Microsoft, and Apple all raising the stakes and making security a big target for the coming few years, developers also need to focus on cyber security and implement new-generation security features within their apps.

10. New-gen Mobile Games See the Light of Day: With the advancements being made in the field of social connectivity and cloud technology, now is the time for developers to focus on games which have an increased multiplayer focus rather than developing only single player games.
By developing new-generation games based on the latest game engines, which also make use of easy access to cloud technology, developers can push frequent and rapid updates to enhance the UX.

Read an article on 10 Trends That Will Shape Mobile Development in 2018 and Beyond.

As one of the world's leading mobile app development service providers with hundreds of projects under our belt, we are all prepped and excited for what's awaiting us in the coming year. We believe in staying in-tune with all current technological advancements, and our services will ensure you receive a high-quality mobile app for your platform of choice, in as short a time as possible.

Pricing is a critical factor to consider before outsourcing. Our pricing model allows you to keep your costs in control.

Read Case Studies to find out how we helped our clients with Software Development Services.

Tell us your requirements and get a free quote.

Get a Free Quote in 24 hours