Do you want to transcribe your media records on investigation? Are you looking for a transcription partner whom you can rely on, for confidentiality? Contact Flatworld Solutions immediately to meet your investigative transcription requirements. We can ensure the confidentiality of your sensitive data and superior quality transcripts as compared to the other service providers in this industry.

Have a look at our transcription portfolio -

First Speaker: To tell you basically what this is about is when I was watching Harvey Mackay at one of Harv Eker's things, he said he just finished the Boston marathon and you know, the guy is 76 and I went holy crap, you know, that is amazing. He looked so fit and he is so quick minded and so on I thought, all of a sudden it occurred to me I bet the way you eat, you know, is different. I bet you don't just eat a bunch of garbage and that started this thought. So, the basic three questions will be and I am recording it for you as well if I transcribe these for the book, but then I write about it and what has really been neat about it is that what started out as three same questions to everybody, everybody had kind of a different angle on it and I realized that they were creating the chapters for this book and of course Marci Shimoff read me right [???], I am not doing something where I did all the work and you are just transcribing it, but if you actually write in the book, I will do it. So I made her that promise and it was a hard promise, but it was a good one to make because it made me think more, you know.

Second Speaker: Got you.

First Speaker: So, what I would do is I basically introduce you and then you can add anything that you think is important to that introduction and let me get my history up here because I have you on here. So, how is Robby doing?

Second Speaker: Good, hangin' in there.

First Speaker: Yeah, did you guys have a nice holiday?

Second Speaker: Well, we actually kind of had a [???] holiday, her father who is very old got sick and ended up passing away.

First Speaker: Oh I am sorry to hear that.

Second Speaker: But, you know, stuff happens, what are you going to do?

First Speaker: So I am going to - is your best website, at the end I am going to ask you, you know, about your website and stuff, is rickfrishman.com the best one to go to or -

Second Speaker: Yeah probably just for most stuff that is probably the best way to go yeah.

First Speaker: You had a really good bio on one of your websites.

Second Speaker: It is up there, there is one, you know, in most of them. I also have rickfrishmanblog.com, you know.

First Speaker: Let me check that out, okay so the -

Second Speaker: There is a bio on that one, but it is also a bio on just rickfrishman.com.

First Speaker: There we go about Rick, yeah.

First Speaker: So you know, one of the things that I will bring up is, you know, you always talk about how you have the biggest Rolodex and I thought that was a really cool angle too because part of success is who you know and you know, I think that is important. I don't know what your angle is going to be on this, but you know, the questions will be do you think that that hypothesis is true that, you know, food affects your ability to succeed on some level and then if you -

First Speaker: You know, if it plays into your level of success. In other words, you know, I know there are successful people who eat crappy food, but so far kind of the consensus has been, you know, it has run the gamut of extremes, but so far people seem to say, you know, they can't keep up their energy if you speak a lot. You do a lot of speaking so you know, and you have a hectic schedule, so I imagine that if you are, you know, full of two pizzas, you probably don't have the energy on stage that you normally would.

Second Speaker: Right, it is true.

First Speaker: So, that's kind of the angle, but...

We will use professional audio/video tools to analyze file quality and speech patterns. If required, we will amplify the audio if it is distorted

Once the speech patterns are enhanced, our transcription experts opt for a precise interpretation by intently listening to different wavelengths

After transcribed files pass the quality check, we files are delivered to the clients through a secure FTP channel

Other Services You Can Benefit From

Why Should You Outsource Investigative Transcription to Flatworld Solutions?

With an experience of over 17 years of experience, Flatworld Solutions is confident about what it can achieve in the field of investigative transcription. Followings are some of the salient features that have made us stand apart from the crowd - 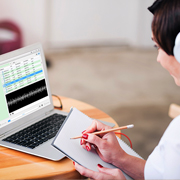 Flatworld Solutions helped a teaching consultant/author/publisher with the audio transcription. Four hours of audio was transcribed in just 48 hours with an accuracy of 98%. 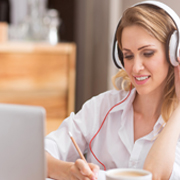 Flatworld was contacted by an Irish client who wanted several hours of mock counseling was transcribed in 72 hours with a high rate of accuracy.

Thanks so much for the great work you and your team completed for our audio transcription project. The service was fast and professional, and the quality was excellent!

To get an affordable quote, contact us now. We will contact you back within 24 hours to hear your queries.

Have specific requirements? Email us at: transcription.info@flatworldsolutions.com