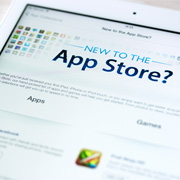 App Store Optimization, or ASO, is a way to ensure that not only does your app meets the app store ranking criteria, but also moves to the top of the search page results when people search for an app. Optimizing an app for the app store is a critical step in the mobile app marketing phase as this is the step which enables better discoverability of the app in the respective app store.

The key difference between SEO and ASO is what happens after the user lands on the app page. SEO helps in getting the user to the page, but in the case of ASO it is more about customer conversion rather than just getting traffic to app page.

With increasing opportunities comes increased competition. A whopping 63% of the apps today are discovered only through app store searches, and a vast majority of the users who search for an app also end up installing it. At the same time, app store optimization is no cakewalk, and apart from knowing what to do, it is equally important to know what 'not' to do. Here are some myths about app store optimization that need to be avoided at any cost:

To boost the number of app downloads developers or app marketers need to understand the importance of ASO. App Store keyword Optimization can prove to be a key factor in the success of an app. Some of things one needs to take care during ASO are listed here:

1. Choose the Right App Name: Just coming up with a unique name isn't enough for an app to rank. The app title needs to have relevant keywords for best results with ASO. It is found that app titles with proper keywords ranked 10.3% higher as compared to the ones with no keywords in their titles.

2. Understand your Customer: In order to market the app to the right customer, the marketer needs to understand the customer base very well. The marketer needs to study various parameters such as language, keywords searched, etc. before optimizing the app for better search results. In addition, the marketer also needs to understand the existing competitors, their weaknesses and strengths, etc. so as to portray the app as a value proposition as compared to the other apps available in the store.

3. Maximize the Keywords: Both Apple and Google have two different strategies when it comes to ASO keywords. Apple's App Store allows developers to use a 100-character keyword field. It then uses these keyword phrases to determine which search strings the app will appear for. On the other hand, Google provides a 4000-character limit which will is used just like in normal SEO, allowing developers enough options to maximize their keyword strength.

4. Design a Unique Icon: Since customers browse through several different apps before downloading one, your app icon needs to be unique in order to stand out from all other similar apps. Not only should it convey your apps' inherent functionality, but also draw in the viewer with its overall design. It is also important that the designers review the design guidelines followed by Apple, Google, etc. before creating the icon. This is because all app stores have preset standards for icons, including ideal sizes, color schemes, etc. which are designed to match the rest of the OS.

5. Write a Captivating Description: Your apps' description should be short and also have strategically placed keywords which are targeted towards your customers rather than the search engine index. The description must act as a call-to-action for the customers and compel them to download the app and use it.

6. Localize your App Listing: Today, more than 72% of the people prefer to browse for apps in their native language even if they are fluent in English. This indicates the massive opportunity in front of mobile app marketers and how they need to approach the market. As an app developer, you should consider localizing and adapting your apps' brand, communication, and language to the needs of the audience segment. By doing so, one can increase app adoption and customer conversion as more people will be attracted to download and try the app.

7. Include Videos and Screenshots: Like icons, well-captured screenshots may not have an effect on the rankings too much but can result in many more downloads. Images convey much more information than normal text descriptions and allow the users to visualize the app before downloading and using it. It is important that your screenshots show off your app's pivotal features, latest updates, and the most popular screens of your app.

8. Update Your App Frequently: Customers are always looking for apps that are constantly evolving and becoming better with regular updates. Apps that are frequently updated are considered to be of higher value because of their customer-centric approach, and lead to better store results and increased rankings. App updates correspond to better reviews and ratings as well, as people are liable to change their existing reviews and leave behind better ones when their complaints are rectified.

9. Increase Traffic with Outside Promotion: It's important that one drives a lot of traffic with outside promotion apart from in-page optimization. It is widely believed that Apple and Google consider the total app-page visits and product page backlinks when determining your search and overall rank. As a result, you should also focus on promoting your apps through ads and other marketing material.

10. Encourage Feedback and Ratings: A consistent flow of positive reviews is considered as one of the highest determinants of app rank and talks a lot about the app's inherent quality. The apps with the highest ratings are the ones which keep their customers engaged and solicit their feedback to shape their product for the future. There are many ways you can incentivize happy users to rate and review you app as well, while ensuring users are not bothered with pop-ups to rate the app every single time they open to use it, as it can lead to user churn.

Get Your Mobile App Optimized by Flatworld Solutions

Flatworld Solutions has been providing high-quality mobile app development services for more than a decade now. Our professionals take care of all your app submission and app store optimization worries, as everything right from the design phase to the eventual store optimization and app upload for our clients is handled by personnel who are experienced in that particular domain. Read our article on App store comparison to know more about how each major app store is different in its own right, and how you can optimize your apps for each one separately to target multiple user bases effectively.

If you have any mobile app optimization needs, be it for Android, iOS, Windows, etc. feel free to get in touch with us and we will get back to you within 24 hours.