Top 15 Cryptocurrencies to Watch Out for in 2018 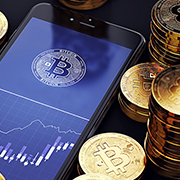 The financial world is in turmoil. Some experts consider cryptocurrencies as the currency of the future; while some feel that it is a volatile bubble about to burst and the investors are doomed to failure. But the fact is that the world is acknowledging cryptocurrencies, banks are taking notice, individuals, as well as businesses, are investing in it, and slowly the whole system is becoming more stable. If you are new to the world of cryptocurrencies, here are some quick facts to get you started.

Cryptocurrency or digital currency is a digital asset designed to work as a medium of exchange that uses cryptography to secure, control, and verify the transactions. The decentralized control of each cryptocurrency works through a blockchain, which is a public transaction database functioning as a distributed ledger. In simple terms, it is a virtual currency that has no physical form and each transaction is just numbers moving from one digital wallet to another. Instead of a central bank or authority maintaining the ledger of transactions, an algorithm keeps track of all the transactions in a public ledger known as the blockchain.

How is Cryptocurrency Different?

Top Cryptocurrencies to Watch Out for in 2018

Partner with the Best in the Software Development Industry

Flatworld Solutions has been a leading provider of software development services and a host of other services to global clients for over 19 years now. Our team comprises of some of the most talented and brilliant minds who are well-versed with the latest happenings in the industry including artificial intelligence, machine learning, cryptocurrencies, cloud, etc. to name a few. We have multiple delivery centers spread across the globe which enables us to deliver the results within a quick turnaround time.

If you are looking for a reliable, efficient, cost-effective software development service provider, then you have come to the right place. Get in touch with us today!