10 Reasons how Outsourcing to Latin America can help your Business 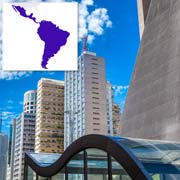 The notion of outsourcing is increasingly changing and it no longer refers to the removal of businesses or jobs from a country. On the contrary, today outsourcing is more about forming global partnerships and exploring efficacious ways of completing crucial projects. While India and Philippines have garnered immense appreciation and acceptance worldwide for being top outsourcing destinations, gradually, many new countries are emerging as providers of best-in-class resources and quality-focused solutions while giving global organizations a lot of reasons for outsourcing. One of them is Latin America.

One of the new names evolving in the outsourcing business is Latin America. Owing to time-zone compatibility, cultural similarities, and a tech-savvy demographic, Latin America offers high-quality development services to the companies outsourcing in the region. As per a study conducted by the London School of Economics and Brookings Institute, Santiago in South America has been ranked at #5 amongst the 10 best economically performing cities in the world. Innumerable trends in the continent of Latin America have created an ever-growing pool of IT talent which can then be deployed by companies to achieve low-cost development services. Today, many top US based companies, including Globant, Toptal, Scalable path and many more are progressively looking at Latin America as a potential offshore center for their future development projects. In this article, we will provide an insight about the main reasons to outsource to Latin America, and how it stands to affect the global economy.

Here are the top 10 reasons, which signify how outsourcing to Latin America can help your business.

We offer a broad array of services for a plethora of industry verticals and our seasoned professionals excel at delivering tailored projects as per your needs. Feel free to share your project requisites or queries, and our executives will provide you the apt solutions and satisfactory services.

Ethical issues posed by outsourcing and how Flatworld Solutions addresses them.

The Benefits of Outsourcing

Some key benefits that arise from outsourcing.