NAFTA Renegotiation by Trump - How Will It Affect Small Businesses? 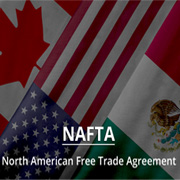 The victory of President Donald Trump in the U.S. Elections was a landmark moment, not only in the way the whole Republican election campaign was undertaken but also the way it signified a dramatic shift in U.S Foreign Policy. Trump's victory was built on the promise of fighting for the common man in America, keeping jobs in the country while giving more opportunity to the impoverished.

Keeping to his promise, Donald Trump vowed to renegotiate NAFTA (North American Free Trade Agreement) on the day of his swearing-in ceremony with Mexico, pledging to bring massive changes to the existing trade deals in place. He described the North American trade agreement as "the worst trade deal in history", blaming it solely for the poor state of U.S. manufacturing industries.

The White House soon also released an official statement speaking clearly about its will to renegotiate NAFTA with Mexico, expressly stating that if their partners denied a renegotiation, then the U.S. would withdraw from the trade deal. While NAFTA renegotiation could severely impact many areas of business, in this article we will focus on its effect on small businesses.

The North American Free Trade Agreement is a trade pact between three geographically close countries, including the USA, Canada, and Mexico. The framework of this deal was initially drafted under ex-US President Ronald Reagan back in 1987 and was finally signed and brought into operation under Bill Clinton in the year 1994.

As a free trade agreement, NAFTA has greatly boosted business within these 3 countries, eliminating costly trade tariffs while allowing supplies and materials to flow freely across borders. Today, NAFTA is the world's largest free trade agreement and more than $1.4 billion worth of goods daily cross the US-Mexico border seamlessly owing to this deal. NAFTA also makes it easier for manufacturers and companies to move operations from one country to another. Under its current state, NAFTA encompasses the following -

NAFTA Renegotiation by Trump - The Basics

One of the major reasons for the discord and why President Trump wants to renegotiate NAFTA lies in the fact that he believes thousands of US jobs have been lost due to this trade agreement, which is true to a limited extent. This is because for every job lost, there are many other US-based jobs which are reliant on NAFTA as it exists currently. This figure stands at about 6 million as of now.

According to most major decision-makers and analyst figures, the US has lost more jobs to automation and computerization than to NAFTA. At the same time, it cannot be denied that many companies have moved to Mexico over the years to cut their production costs, including Ford and GM. At the same time, both these companies still employ more Americans than Mexicans. Add to this the fact that the US also exports a large amount of materials to Mexico, to the tune of about 430 million US dollars, and you can understand why many policy-makers and business owners are apprehensive about the effect of Trump's renegotiation efforts.

NAFTA Renegotiation and Small Business - What the Future Holds

The NAFTA definition incorporates "free-trade" as one of its strongest tenets. Therefore, ending NAFTA as it is in the current form can have a big impact on the way small businesses function currently. Also, it is highly probable that if Mexico loses its free trade rights, then US business might just move to the next cheapest option in Latin America or some other Asian country. Some of the effects that small business owners might see soon include -

At FWS, we have worked diligently over the past 19 years to cultivate strong business relationships with our global and US-based business clients. We believe in supplementing their existing roles with high-quality bespoke logistics services to take care of their express needs.

Contact us right away to know more about our service offerings, and how they can help you streamline existing processes and generate better business revenue.