Trump Withdraws Trans-Pacific Partnership Trade Deal - What Does it Signify? 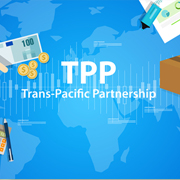 At the US Presidential Elections held on the November 8th, Donald Trump, a multi-billionaire with zero political pedigree took not only the country but the entire world by storm by convincingly winning the electoral vote. Trump's right-wing populism, combined with his attention-grabbing persona won the hearts of many republicans, while also swaying many democrats his way.

One of the tent poles of Donald Trump's campaign was to push for US withdrawal from TPP (Trans-Pacific Partnership), and within one month of him holding office, he has come true on his election promise. During his inauguration address, the President stated that U.S. trade policies formulated over the years have "enriched foreign industry at the expense of American industry," and vowed that he will ensure that the TPP deal is scrapped in order to help American workers.

The Trans-Pacific partnership trade deal was an agreement between 12 countries bordering the Pacific Ocean, who together represent more than 40% of the world's total economic output. These countries include Canada, Japan, Singapore, Australia, Malaysia, New Zealand, Vietnam, Brunei, Mexico, Peru, and Chile. The TPP trade deal was considered important since it would allow these countries to control the Asian market while countering China's growing economic power.

Although the Trans-pacific partnership was initially discussed and negotiated under erstwhile president Barack Obama, it was never ratified by the U.S. congress. As a result, Trump's backing out from the TPP would not have any significant repercussions on the economy of the United States, but at the same time, has left this deal null and void for the other countries involved.

For the TPP to be a success, US participation was extremely important, and now, as things lie, the Trans-pacific partnership as we know it will not proceed ahead in its original avatar. Let us have a look at a few significant ways in which TPP withdrawal will affect global trade -

At Flatworld Solutions, we have worked with countless American clients over the past 19 years, providing them reliable and streamlined logistics assistance. We believe in not taking, but supplementing the work of our American counterparts to build a cohesive, interdependent work atmosphere, helping them concentrate on business-critical tasks and outsource the mundane. For all your queries regarding our outsourcing ethics pertaining to logistics services, please contact us right away.